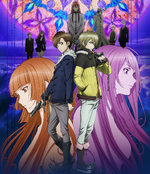 It is being simulcasted subtitled in English on Crunchyroll. It has been licensed by Aniplex USA in North America and by Madman Entertainment in Australia. The opening themes are "Spirit Inspiration" by Nothing's Carved in Stone and "Daisuki Nano Ni by Kylee, while the ending themes are "happy endings" by Kana Hanazawa and "Bokutachi no Uta" by Tomohisa Sako.

Community content is available under CC-BY-SA unless otherwise noted.
Advertisement